Many years ago, the ancients devised the zodiac, based on, which constellation appears immediately behind the sun. Of course you can’t see the stars and the Sun at the same time. But watching the constellation that rises just before sunrise, and one that sets just after sunset, one can figure. With observations made throughout the year, a watch, and some mathematics, an accurate determination can be made. Aries became the first period of the zodiac, as they found the sun just entering the constellation Aries on the spring equinox day, every year.

However, the equinox is linked to the tilt in the earth’s axis, which, it turns out, has a wobble. The axis today points to Polaris, but it did not do so two thousands years ago. Result being, today the equinox doesn’t occur on the day the sun enters Aries. It has been slipping back by a day every seventy years. You can call it a precession, if you have a thing for such words.

In the tropical zodiac, Aries still starts on the equinox day (March 21), even though the sun really enters Aries a month later.

In the tropical zodiac, the western astronomers decided to keep the spring equinox as the reference, and by convention Aries still starts on the equinox day (March 21), even though the sun really enters Aries a month later. If someone is born on October 26th, like my wife, she’s a Scorpio based on this zodiac. However, the sun wasn’t actually in Scorpio when she was born. Take my well learned advice though, don’t take her any lightly for that.

In the sidereal zodiac, Aries starts on April 14, when the Sun actually enters Aries, even though the equinox is a month earlier.

In the sidereal zodiac, the eastern astronomers decided to use the sun’s actual position as the reference, and Aries starts on April 14, when the Sun actually enters Aries, even though the equinox is a month earlier. In this calendar, the new year on April 14 isn’t a real equinox. It is the day when the sun is in the same stellar position, where it was on the equinox day, on some reference year, 1500 years ago.

Which one is better? It is a matter of choice.

You could say that the sidereal zodiac is astronomically more accurate. The stars offer a sturdier frame of reference than the axis of earth. But the tropical zodiac corresponds to the seasons better. The seasons are after all, driven by the wobbly axis.

The Sidereal zodiac is the basis for the solar calendar used by Indian mathematicians. April 14th ( or 13th) is celebrated as New Year’s Day in the states of Tamil Nadu, Kerala, Odisha, Assam (Bihu), West Bengal and Punjab (Baisakhi). For more about the various New Year’s Days of India see the post on One Nation Many Calandars.

India has as many new years as states. But there is a method to the madness.

The calendars can be grouped in five main variations. Two are solar, three are lunar.

The solar new years correspond to a specific day of the Gregorian Calendar, which is also solar. The lunar new years start on a specific phase of the moon.

The first solar group starts on the Tropical Equinox, when the day and nights are equal, around 21 March. The Indian National Calendar and the Parsi Navroz are in this category.

The second solar group starts on the Sidereal Equinox, which adjusts for the wobble in the tilt of the earth. It starts around April 14. The calendars of Tamil Nadu, Kerala, Odisha, Assam (Bihu), West Bengal and Punjab (Baisakhi) are in this group. The equinox shifts away from the sidereal new year by about a day, every hundred years.

The first lunar group starts on the full moon following the equinox. This is Holi, celebrated as new year in Haryana, Bihar, Rajasthan, Madhya Pradesh, Uttarakhand, Jharkhand and Chhattisgarh.

The second lunar group starts on the new moon following the equinox. This is Ugadi in Karnataka, Andhra Pradesh, Telengana, Maharashtra and Konkan; Navreh in Kashmir and Vishu in Manipur.

And finally, Gujrat starts its calendar on Diwali, which falls on a new moon in autumn.

For 4000 years the RgVeda has been sung by traveling nomads, chanted over sacrificial fire and analyzed in monasteries and academies. Even through the prism of modern visualization techniques it still appears fresh. Explore its verses in wikisource using the sunburst wheel on the left, and learn its concepts using the wikistalker wheel on the right. The visualizations are best viewed in a desktop.

In his book Four Thousand Years of Urban Growth: An Historical Census Tertius Chandler traces the history of the worlds largest cities, collecting a wealth of population data across time. This visualization, which is based on his data, plots the growth of each city around the time it was the largest in the world. It is a testament to the forces of time that brings and destroys fortunes.

It starts in 500 BC when ancient Babylon was the largest city, soon taken over by the dramatic rise of Alexandria, which became the largest in just a decade after it was founded by Alexander. Mauryan Pataliputra (Patna) was next, ruling over a united India for the first time. It was followed by the capital of the Han dynasty at X’ian (Changan) . Rome remained the largest for about four centuries before it’s fall. Emperor Constantin moved the Roman capital to Constantinople which became the largest, until superseded by Ctesiphon in Persia. Then X’ian took the top spot again, this time under the Tang dynasty. Baghdad, the seat of the caliph, was next eventually reaching a population of over a million. After it’s decline the Spanish-Moroccan city of Cordova retained the top spot until it was sacked in 1013 AD.

Contemporary rendering of ragamala paintings along with the traditional versions in Mughal and Rajput style. 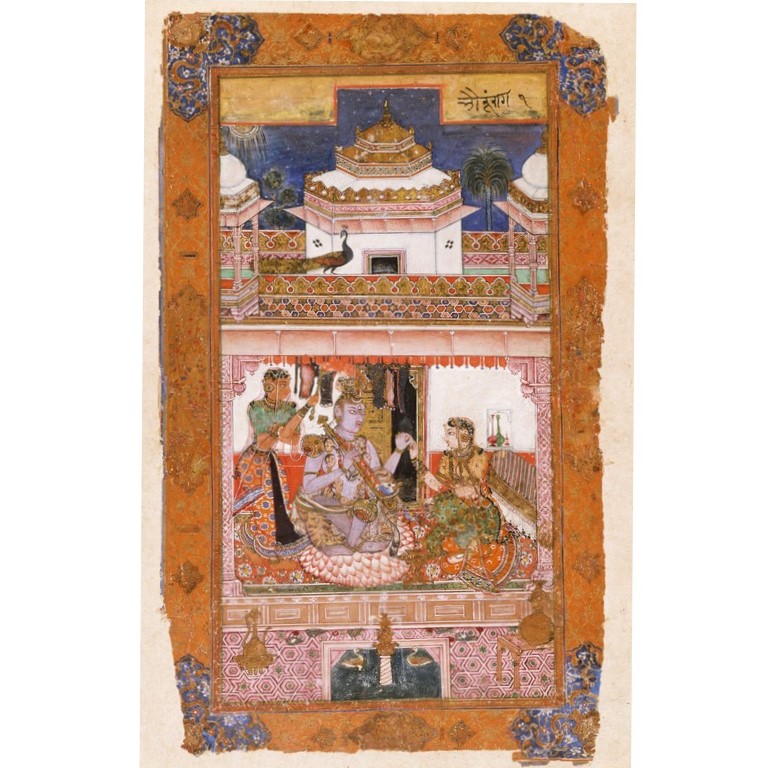 In music literature from the 14th century onwards, ragas and raginis are frequently desribed in a short Sanskrit verse where they are personified as a particular deity or as a hero and heroine in various traditional love scenes. Later these raga ragini images were portrayed in a series of paintings known as ragamalas. As H.J.Stoke puts it – “Poetry, painting and music were thus brought into a new relationship”.
Source: The Raga Guide: Survey of 74 Hindustani Ragas Box set

Ragamalas were not made to hang on a wall; they are tactile objects for private consumption. Each set of thirty or forty loose pages were sometimes bound or left as a set and stored on a shelf. At special events they would have been passed round fellow connoisseurs after shared food and music.
Source: What is Ragamala? By LIZZIE WATSON

These ragamalas were also painted as murals in the private quarters of palaces, though few of these have survived.
Source: The metropolitan museum of art. 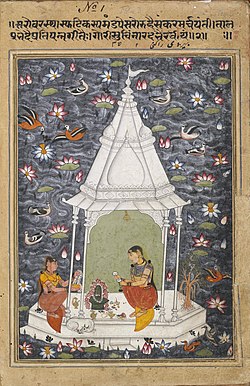 In this book a number of dialects are used, to wit: the Missouri negro dialect; the extremest form of the backwoods South-Western dialect; the ordinary “Pike-County” dialect; and four modified varieties of this last…
I make this explanation for the reason that without it many readers would suppose that all these characters were trying to talk alike and not succeeding.

With it’s earthy vernacular it was a book that served as a Declaration of Independence from the genteel English novel tradition [1].

Most classical literature of India was composed in Sanskrit, a language that was tied down by rules of grammar. However, drama is one genre which adopted a multilingual composition using both Sanskrit and the many Prākṛits – the languages of the people. The surveys by K.R. Chandra and T.N.Dave show that

50% of the text of Sanskrit dramas appears in different Prākṛits. The Mṛcchakaṭikam has the maximum number of Prākṛits, about 15, spoken by about 32 characters.

The theory of drama as laid down in the Nāṭyaśāstra prescribes the use of Sanskrit by characters belonging to noble class and educated persons. Different Prākṛits are assigned to different characters. For instance, queens, harlots, heroines and their friends speak Śaurasenī, the servants in the harem, eunuchs, chamberlains etc. speak Māgadhī, Vidūṣaka, the buffoon or jester speaks Prācyā or Avantī, while Ardhamāgadhī is assigned to merchants etc [2].

Viradhagupta, a secret agent to Minister Rakshasa in the play Mudrarakshasa, speaks prakrit in public, but switches to sanskrit when speaking to himself or in private conversation with the Minister. We will learn more about the adventures of Viradhagupta in The case book of Royal Agent Veeru.

Women, even of the noble class, speak Śaurasenī (the predecessor of Hindi), such as the character of Draupadi in the Mahabharata based play Venisamhara.

A notable exception is the courtesan Vasantasena in Mṛcchakaṭikam (portrayed by Rekha in the movie adaptation Utsav) who speaks impeccable Sanskrit. When speaking to Maitreya, a poor Brahmin friend of Charudutt, as if intentionally she demonstrates her command of the language against the much less refined Sanskrit of Maitreya, who does not approve of her relationship with Charudutt.

The use of vernacular in Sanskrit drama may or may not have been an accurate reflection of social reality, but it was certainly a literary device very effectively used by the playwrights.